It is the beginning of March as I sit down and write this newsletter, and already this year we have ministered at farm shows in West Monroe Louisiana, Louisville Kentucky, Kansas City Missouri and Memphis Tennessee. In fact, I have spent so much time in the south ministering this year, I am probably starting to sound like a southerner. 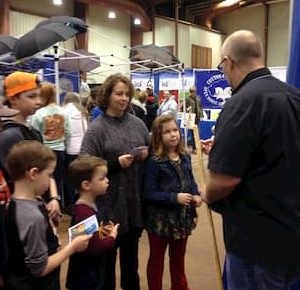 At the Louisville and Memphis farm shows, we were ministering to people from all over the south, Midwest and world. Last week in Memphis, after ministering to a group of young men from South Africa (they also had a southern accent but not the American one) they all prayed to receive Christ into their life. I was even able to minister in Spanish at both farm shows and give out Spanish Gospel literature. 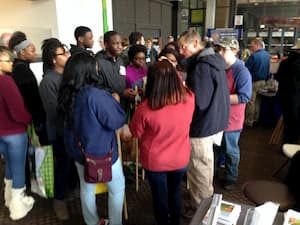 One of the many groups of people we ministered to in Memphis hearing the Gospel from volunteer Nick Korn.

A maintenance man working at the Kansas City Western farm Show told us as we were setting up that he came to our booth last year. He was really ministered to and received salvation. A short time later, his wife died and he said that what we had shared with him and how we prayed with him got him through that tough time. Another man came to our booth in Kansas City and said his son got saved through our ministry.

A lady in Kansas City shared with us that last year her atheist friend tagged along with her to our booth. The atheist friend stood afar off as we preached. According to her friend, this atheist woman became a totally changed woman for the better and has not been the same since. This just shows us the truth of Hebrews 4:12, God’s Word is alive and powerful and is still changing lives today. 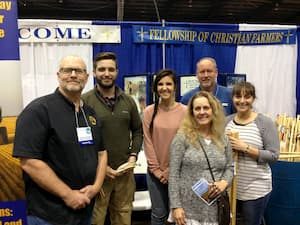 The Bible says the steps of a good man are ordered by the Lord so we should believe that God will always have us at the right place at the right time. This happened to me as I was getting into an elevator with a maintenance man at the Memphis farm show. He was slumped way over in pain. I thought maybe he was having a heart attack. When I asked him if he was all right, he said that he had terrible back pains and had back problems for 10 to 12 years. After I prayed for him in the elevator he said he felt better and stood upright. Jesus healed him. I was then able to share with someone standing by the elevator what Jesus just did. 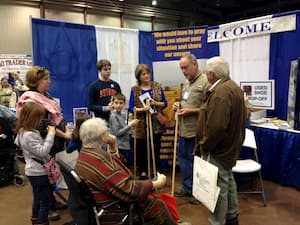 People of all ages visit our booth. Mike Weaver is ministering to people in West Monroe, LA

At these farm shows we have been very busy giving out free Wordless walking sticks and seeing multitudes of FFA kids and others get saved but I believe we have just scratched the surface of what God is going to do in the future.

The next few months I will be ministering at the farm shows in Wichita Falls Texas, Dodge City Kansas, and at FFA State Conventions in Nebraska, Oklahoma, Kansas, Missouri, Iowa, Illinois. Thank you, your prayers and support help make all this possible.

A crowd of people listening to Mike Weaver in Memphis