To understand the history of the ministry, it is best to first know the history of the man. Jeff Goss was born in 1961 and he did not hear the Gospel message until he was about 13 years old at a Christian football camp at Sterling College in Sterling, Kansas. He asked Jesus into his heart at that time but did not follow Him very closely or make Him Lord of his life until he was 19 years old.

In his own words he shares about the encounter that he had with God in the basement of a friend’s home in Dodge City, Kansas.

The Bible says that the way of the transgressor is hard and because of my sins (drugs, alcohol and immorality) as a college sophomore my way was full of oppression. On March 28th, 1981 I hit my knees and was crying out to the Lord for help and then it happened. It’s hard to describe exactly what it was that happened but the Holy Spirit came upon me in a mighty, powerful, overwhelming way. I felt the chains of sin and bondage come off of me. I went from extreme turmoil and torment to extreme peace and joy in one instant. It felt like a thousand pounds of weight came off of me and I felt clean, light and forgiven. The blinders came off my spiritual eyes and it was like a light came on inside me. All of a sudden I could see that I was a sinner, that sin was bad and that God was good. I thought to myself, “Why didn’t I give my heart to God sooner, because this is so awesome”. I went to a beer party that night and tried to drink a cup of beer but I couldn’t drink it. I broke up with my girlfriend that same day and I surrendered my life completely to the Lord.

In the summer of 1982 his evangelistic ministry began by being part of a group from his home church in Great Bend, Kansas that would drive to small towns in the area and go door-to-door sharing the gospel. He had a hunger to know God better and believed He had a call on his life so he enrolled in Marilyn Hickey’s Bible College that fall. While there he did a lot of street ministry and was even the assistant leader and eventually became the leader of the singles’ evangelism program. He graduated in 1984 and has been involved with ministry ever since then. 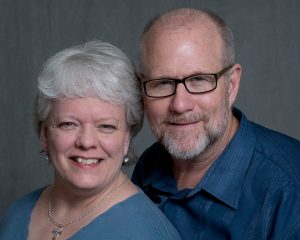 Jeff helped pioneer and was associate pastor of a church in Topeka, Kansas. He left Topeka to become a missionary in Mexico in 1987. In 1988 Jeff met Julie Van Loon, a fellow missionary, and they married in the summer of 1989. They served together as missionaries to the Navajo Reservation where their daughters Kara and Leticia were born. In 1994 God led them to Kansas City where Jeff pioneered and pastored an inner city church and worked at a homeless shelter. Kansas City was also the birthplace of their son, Tommy. In the fall of 1998 Jeff moved back to Great Bend and was the youth pastor and associate pastor of a church and pastored another church in LaCrosse, Kansas. While in Great Bend Jeff began ministering with the Fellowship of Christian Farmers in their Farm Show Outreaches. Jeff, Julie and their 3 children moved to the St. Louis, Missouri area in 2004.

Throughout his years in ministry, Jeff’s evangelistic calling was evident, but it was in St. Louis that evangelism became the main focus of his ministry. He has led street ministry teams, taught evangelism workshops, and has participated in and/or led hundreds of outreaches. Jeff Goss Ministries operates under Victory World Outreach Church, Int. out of Washington DC and has ministerial credentials with the Assemblies of God. He is area leader with the Fellowship of Christian Farmers, ministering in outreaches at farm shows and FFA conventions throughout the United States and Canada. Jeff also preaches and does Evangelism Workshops at churches. Jeff continues this day to fulfill his vision as an evangelist and encouraging others in evangelism.