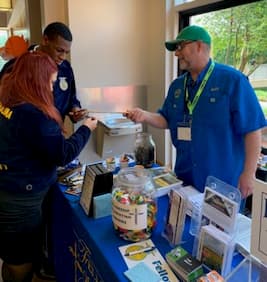 Sharing the gospel at the South Carolina State FFA Convention

As I sit down to work on this newsletter, I am so thankful to God who has been faithful in opening so many doors of opportunity for us this year to preach the Gospel to so many people across the nation. With still three months to go in this year of 2019, we

have already ministered at 18 different outreaches which includes seven farm shows, 10 FFA state conventions, and our most recent outreach to the Navajos at the Window Rock Navajo Nation Fair. What makes these outreaches so special is that thousands of people prayed with us to receive the Lord and received New Testaments and other good Gospel literature and follow up material. I truly believe that many of these people will become missionaries and evangelists reaching people that we can’t reach. We have already seen this when a teenager at the Texas State FFA convention in Fort Worth took some of our walking sticks and began ministering to other Texas kids at the convention. I was amazed as I watched him preach with fire to the other students at the convention. We are also seeing Christians become excited to be used by God to reach the lost. A couple of men who went with me to Window Rock Arizona to minister with me for the first time got so excited about the ministry that they want to continue to do outreaches. One of them even wants to move to the southwest and be a full-time minister to the Navajos. This ripple of effect is going to help speed up revival in this nation and world. 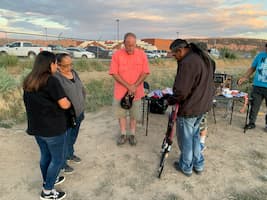 Mike Weaver praying with a family

Please be in prayer as we finish this year strong. We have several more major outreaches planned including the Ozark Farm Fest this week in Springfield Missouri. The Ozark Farm Fest is always busy with thousands of people visiting our booth. At the first of November we will be ministering at the Royal Ag show in beautiful downtown Toronto for the fourth year in a row. This is one of my favorites because Toronto is such an international city and we are ministering to people from all over the world who have not heard much Gospel. In December we will have our last big farm show of the year in Tulsa Oklahoma.

I believe the last day harvest has begun and with your faithful prayers and support you are an important part of the fruit that is produced by this ministry. It is not always cheap and easy traveling around and preaching the Gospel, but it is well worth it to see people’s lives changed and transformed by the power of the Gospel. Thanks for your prayers and support that makes all this possible. 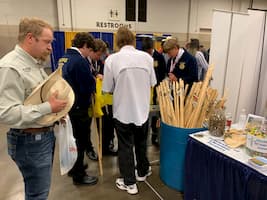 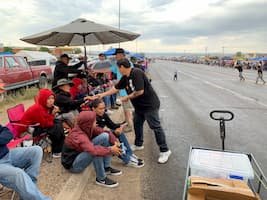 Passing out Gospel tracts to the crowds waiting for the parade to begin. 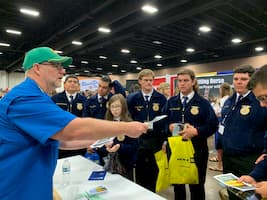 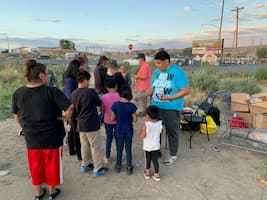 William French ministering to a group