I was reading the Christmas story recently in Luke 2:8-10 where the angels appeared unto the shepherds in the field, and it says in verse 9 that the shepherds were sore afraid. Unfortunately, that seems to be the state that a lot of people are in now. People are afraid of what may be coming down the pike. So many things in the natural look shaky and unstable.

Nevertheless, the message the angels gave the shepherds is the same message that we need to hear today, “Fear not!”. Remember, God is still on His throne. The greater One, the Holy Spirit lives in us Christians. We still have His Word to stand on and His Word will never fail if we only believe.

Another thing we see in these passages is that the glory of the Lord shined around the shepherds. At the farm shows and FFA state conventions where we have been ministering this past year, we have seen the glory of the Lord manifest with salvation and healings. One man’s kidneys started working after one of our men prayed for him. Another man came up to me recently at the Tulsa Farm Show and said he had been taking shots in his back for pain. After one of our FCFI guys prayed for him, he was able to quit taking those shots 2 weeks later because the pain was gone.

I recently heard about a revival that happened two or three hundred years ago where college students were praying by a haystack when a storm moved in. They were so deep into prayer that they didn’t notice the storm moving in for a while, but they eventually crawled underneath the haystack to get protection from the storm. A revival broke out from that, and it was called the Haystack Revival. I have often said that as we have seen many people come to Christ by sharing the Gospel message by using wordless walking sticks, that this revival will be known as the Stick Revival.

A married couple came to our booth at the Indiana State FFA Convention last June. The lady said they needed to be somewhere else but they stayed and prayed with me to receive the Lord. She stated that getting saved was much more important.

The highlight of the year for me was ministering at the Texas State FFA Convention for 3 solid days at the Downtown Fort Worth Convention Center. Over 19,000 kids from all over the state of Texas were at this convention, and many made their way to our booth to be ministered to. A lot of these kids seemed to know that revival is the only thing that will save our nation. I believe some of them will go back and share Jesus with their friends and school. The students, teachers, and parents showed a great appreciation for us being there sharing the Gospel.

We have finished this year strong with fruitful farm shows and outreaches in Springfield, Missouri; Wichita, Kansas; Tulsa, Oklahoma; Carbondale, Illinois; and Indy.

Please pray for us as we gear up to minister the first 3 months of 2022 in:

What was Meant for Evil Will be Used for Good 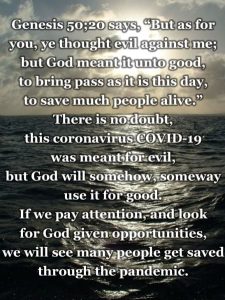